Black Knight Satellite | According to some UFO enthusiasts, the Black Knight is an artificial satellite of extraterrestrial origin which has orbited Earth for approximately 13,000 years; however, the purported “satellite” story is most likely a conflation of several disconnected stories about various objects and their interpretations, all of them well documented independently and none using the term “Black Knight” upon their first publication. According to senior education support officer Martina Redpath of Armagh Planetarium in Northern Ireland.

Stories say it’s up there in the blackness right now, just outside the Earth’s glow. It tumbles slowly and deliberately

through the darkness, sweeping smoothly along its unrelenting orbit. The Earth spins below, largely unaware of its unauthorized parasitic visitor. It is the Black Knight satellite, a mysterious object circling the Earth, of unknown (and possibly alien) origin — the story says it’s up there right now and has been for 13,000 years.

The origin of the Black Knight legend is often “retrospectively dated” back to natural extraterrestrial repeating sources heard during the 1899 radio experiments of Nikola Tesla and long-delayed echoes first heard by amateur radio operator Jorgen Hals in Oslo, Norway in 1928. According to the Daily Express, “the noises from 1899 and 1928 remain a mystery, but the possible causes do not so far include an alien satellite, according to scientists.” Brian Dunning of the Skeptoid podcast attributes Tesla’s 1899 radio signals to pulsars, which were not identified until 1968.

Tesla had just set up in Colorado Springs, where he built a large magnifying transmitter to further his investigations into the wireless distribution of electricity.Soon after he began to receive mysterious signals on the equipment, that seemed to be coming from space. Three impulses, one after the other at fixed intervals. One…two…three.Tesla was entranced. After carefully dismissing all known natural phenomena, he believed he may have received a signal from intelligent life in another world.

Some today suggest that Tesla had picked up signals from pulsars — spinning neutron stars that emit radio waves, although it remains unknown exactly what it was he observed.

The confirmation in 1932 gave birth to the field of radio astronomy, which is now used to decode and detect messages from distant stars and other mysterious celestial sources. Tesla writes:

I can never forget the first sensations I experienced when it dawned upon me that I had observed something possibly of incalculable consequences to mankind. I felt as though I were present at the birth of a new knowledge or the revelation of a great truth. Even now, at times, I can vividly recall the incident and see my apparatus as though it were actually before me. My first observations positively terrified me, as there was present in them something mysterious, not to say supernatural, and I was alone in my laboratory at night; but at that time the idea of these disturbances being intelligently controlled signals did not yet present itself to me.

The changes I noted were taking place periodically, and with such a clear suggestion of number and order that they were not traceable to any cause then known to me. I was familiar, of course, with such electrical disturbances as are produced by the sun, Aurora Borealis and earth currents, and I was as sure as I could be of any fact that these variations were due to none of these causes. The nature of my experiments precluded the possibility of the changes being produced by atmospheric disturbances, as has been rashly asserted by some. It was some time afterward when the thought flashed upon my mind that the disturbances I had observed might be due to an intelligent control. Although I could not decipher their meaning, it was impossible for me to think of them as having been entirely accidental. The feeling is constantly growing on me that I had been the first to hear the greeting of one planet to another. . . . I was not merely beholding a vision, but had caught sight of a great and profound truth.” – Nikola Tesla, from his article “Talking With Planets” (source)

In 1954, an amazing story appeared in technology magazine Aviation Week and Space Technology that suggested exactly that. The U.S. military had discovered 2 mysterious satellites in Earth’s orbit. 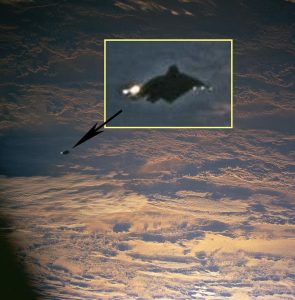 The Pentagon was reportedly furious about the story. They had not wanted the discovery to be made public. An explanation was quickly put out that the satellites were actually asteroids.

Whilst it is possible for Earth’s orbit to capture an asteroid, it’s extremely rare and only happens under certain unusual circumstances. Many scoffed at the Pentagon’s explanation and the widespread belief at the time was that they were artificial.

In February 1960, TIME reported that the U.S. Navy had detected a dark object thought to be a Soviet spy satellite in orbit, however, a follow-up article confirmed that the object was “the remains of an Air Force Discoverer VIII satellite that had gone astray.”

In 1963, astronaut Gordon Cooper supposedly reported a UFO sighting during his 15th orbit of Mercury 9 that was confirmed by tracking stations, but there is no evidence that this actually happened.Neither NASA’s mission transcripts nor Cooper’s personal copies show any such report being made during the orbit.

In 1973, Scottish author Duncan Lunan analyzed the long-delayed radio echoes received by Hals and others and speculated that they could possibly originate from a 13,000-year-old alien probe located in an orbit around the earth’s moon. He suggested that the probe may have originated from a planet located in the solar system of star Epsilon Boötis. Lunan later retracted his conclusions, admitting that he had made “outright errors” and that his methods had been “unscientific”.

An object photographed in 1998 during the STS-88 mission has been widely claimed to be the Black Knight satellite. Space journalist James Oberg considers it probable that the photographs are of a thermal blanket that was confirmed as lost during an EVA by Jerry L. Ross and James H. Newman.

It is often suggested that the sightings of strange objects in Earth’s orbit are space debris. This explanation is routinely used whenever news of such discoveries reach the press. 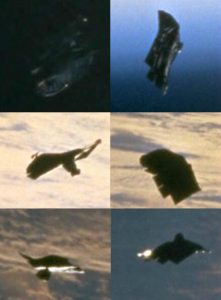 Back in 1960, when the U.S. Navy radar system Dark Fence spotted a huge object in polar orbit, it was quickly dismissed as space debris from the Discoverer program.

However, the object Dark Fence observed seemed to be too large and heavy to be space debris. It was estimated to be as much as 15 tons, far in excess of what any country in the world was capable of getting into space in 1960.

The Russians had the most powerful rockets at the time, but the heaviest payload they could manage was just over 2000 pounds.

So concludes the ultimate chapter in a wild story that spans a century, which seems to have drawn its life blood largely from the pervasive atmosphere of paranoia that colored the Cold War years. Yet despite the most conclusive evidence in favor of the Black Knight’s existence being categorically debunked by NASA folk, the renegade thermal blanket will forever live on in the Agency’s archive of ISS-related space debris as Item 25570, and perhaps more glamorously as the infamous Black Knight Satellite in the internet’s infinite Imaginarium.

Be the first to hear about the latest news & online exclusives.

Thanks for joining! You have successfully subscribed.

How often do you look up into the night sky and wonder just how many stars, planets, galaxies, and more are out there? What is it about deep space that so ignites our collective imagination? ARE WE ALONE?

Be the first to hear about the latest news & online exclusives.

You have Successfully Subscribed!

Your email is safe with us.

The Magic of Crystals

Free eBook
Crystals provide energy, helping the body to the cellular level and the mind reaching the area of suggestion,maintaining health or even recovering. Get the eBook and find out everything about crystals.

You're Amazing! The eBook is on it's way to your inbox. Enjoy!

To our loyal readers!

The Great Pyramid was far to sophisticated and complex for people of behind days to have designed, and was far beyond the knowledge of mortals.

Get 35% OFF the Book and dive in for the story behind! Enter your email and get the coupon code.

Thank you for your interest! Your promotional code is on the way to your inbox.

We value your privacy. We never send you spam or pass your information to 3rd parties.